Get fresh music recommendations delivered to your inbox every Friday.
We've updated our Terms of Use. You can review the changes here.

Dreams From An Urban Desert 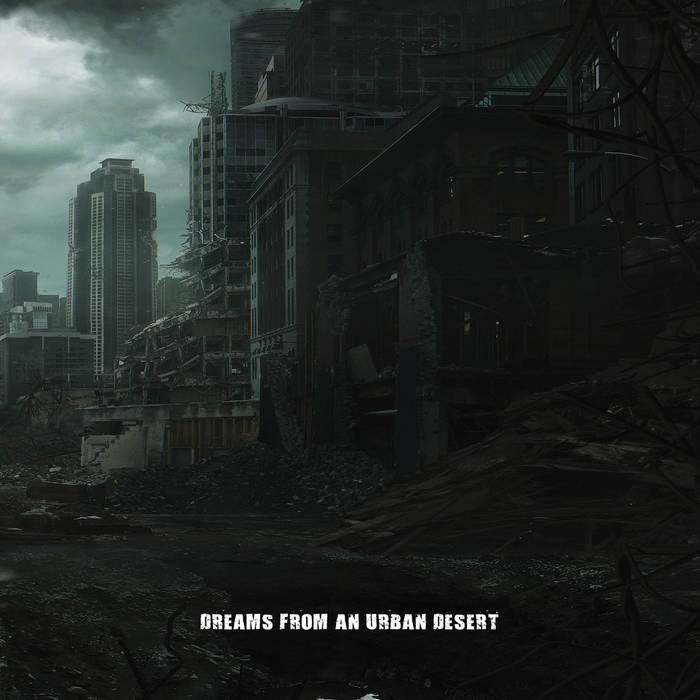 Dreams of an Urban Desert gives the listener a glimpse of a deserted metropolis, the long-decayed battlefield of man’s last stand against the machines. Scuttling beats, sculpted from stiches of industrial noise, takes the listener to the death factories where the first menacing machines were born, things of magnificent regularity and terrifying precision. Swooping static and ambient atmospheres throb, creating the impression of a system of conveyor belts and dripping pipes, rusted and falling apart.

The nature of the sound suggests that long before the machines came, the cities began folding in on themselves, torn apart by their inhabitants, who blamed their rulers for the grey, smoggy skies, their lives of neon lights, the never-ending hikes in prices, the degrading living conditions. But beyond the apparent deadness of the city, something stirs in the connected tunnels below the surface. A new form of life arises, something without the confines of flesh, something more robust, able to survive in the hostile, poisonous environment that humankind has left behind.

The machine mind begins crafting a vision for a new world order—a perfect, matchless world without contradiction or chaos, unpolluted by the disarray of humans, their petty hatreds and limited perspectives. That which began as a mere nascent impulse to create order gains deeper perspective and terrible resolve. The cities must be razed. The spot rubbed out. The dust must cover the things of humans, blot them out. A new, sterile dogma must emerge. A world must be created for machines. The city must become the new desert.

The sphere of consciousness at the center of the ether, the mind of the machine, grows denser and denser—a coalescing sun. That which began as a mere nascent impulse to create order gains deeper perspective and terrible resolve. The cities must be razed. The spot rubbed out. The dust must cover the things of humans, blot them out. The cities must become the new deserts. The magnificent wilderness must come to reclaim the vast tracts of land that have been stolen by mankind. The toxic cloud of the atmosphere must be given time to dissolve. All memory of choice and freedom, must be eradicated. A new, sterile dogma must emerge. A world must be created for machines, where no harm will come to any other life form.

The Hammer and The Relentless from the Boston band Malleus stop by for a chat.